I’ve knitted a lot of hats. They disappear when needed. I thought the family cyclist should have a bright hat for any smidsy moments. The neon orange yarn I bought in the 1980s would be too painful alone, so pairing it with black stripes might be better. There again, a spiral could be interesting…

The Maths for this is easy in theory, moving each colour over by one stitch on every row. In practice I’ve had to stop and think occasionally. Knitting in the round usually involves spiralling upward, rather than the to & fro of two needles. This time, I have to remember to slip the first stitch of the colour, then pick it up on the return journey. There are obviously other methods but this is ok for the moment.

Which unfinished project have I been attending to, you ask? The Novel, obviously! While editing the numerous versions, I’ve been knitting a cardigan. It’s been unravelled and cast on again a few times but maybe the pattern makes sense at last…

I drew the pattern on squared paper, because I couldn’t follow the written version. Then I had to add colours to give a sense of which row etc.

Can’t see the leaves for the stitches(?)

Test printing some little postcards. Were we promised unicorns as part of the Brexit outcome? Nobody can remember…

Democracy – a system of government in which the sovereign power is vested in the people as a whole exercising power directly or by elected officials.

Democracy should mean power to the people, but somehow we have all chosen to give power to the wrong people. We are governed by a small group of people who are out of touch with our distant problems.
Our elected members have done very little to improve life in Pembrokeshire. They have consistently voted in line with their party policy rather than for the best interests of their constituents. Their actions have caused further cuts to our health board and they have helped to slowly eradicate any local educational opportunities.

Previously prorogued parliaments have been followed by military rule after beheading the monarch – the green party might disapprove of royalty but we’re not savages.

We need to save our environment, which is more important than any petty political shenanigans. I’m sorry to be the bearer of bad news but Green Party policy is to look for a positive solution and for everyone to take practical action. Everyone has a skill to offer. Pembrokeshire has a great many worthy projects that are run by volunteers, when they should be properly funded.

There will be distractions such as tribal concerns or the media’s divide and rule tactics, it’s too late to bother with those. You can disagree with someone’s outlook but still achieve some level of common ground.

Do we need to be governed by impractical people that we would never seek advice from? No.

Let our elders and betters shut themselves down. Ideally parliament in its current form would never resume and we could save a vast amount of money and resources. 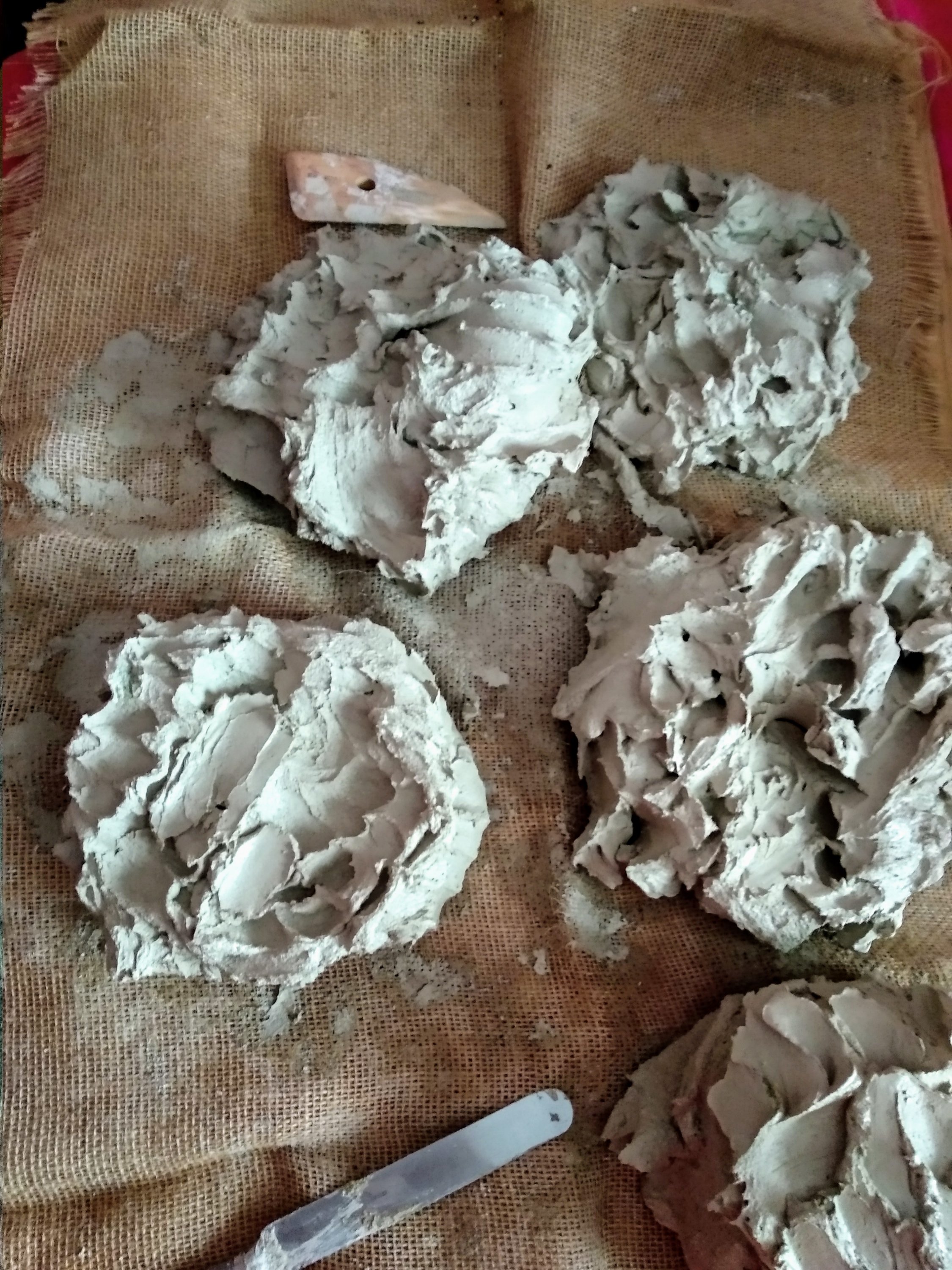 This clay has been waiting for a while. It had dried too much so I put it into a plastic box and watered it. Emptying the box this morning, I spotted a little snail that had been lurking with some friends under the outside edge. It peered over the edge of the box, clearly planning to wander into the pile of clay. I took the snail outside so it could eat some weeds. Then I quickly scraped all of the remaining clay onto hessian and put the empty box out in the rain.

Kneading clay is similar to preparing dough, but at the moment it’s much squelchier.